October 2009
We opened for COWBOY MOUTH at the Majestic Theatre (Madison WI) on Thursday, Rocktober 22, 2009. We love COWBOY MOUTH and we think they love us too. They are probably the BEST party rock band around to date, besides us. 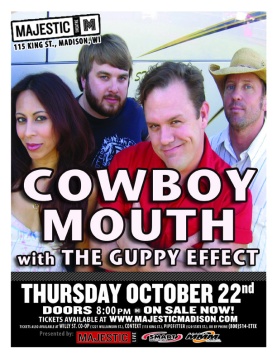 March 2009
GUPPY EFFECT is nominated for BEST COVER BAND OF THE YEAR for the 2009 Madison Area Music Awards. Ironically, our submission was “BECCA,” an original song.